If you have ever ordered anything online, chances are you have bought something from Amazon.

It is the go-to website for everyone no matter what they need to purchase. With extremely fast delivery, it is what most people rely on to get the materials and products that they need.

With being one of the largest companies in the world, Amazon has made a commitment to run on 100% renewable energy by 2030. Part of this plan includes adding 100,000 battery-electric delivery vans.

All these vans will come from Rivian automotive which Amazon bought for $700 million. The first vehicles arrived early in the year 2021, but the majority of them have not been rolled out yet.

Why the commitment to renewable energy?

The CEO of Amazon, Jeff Bezos is a renewable energy enthusiast. He also wants to tackle the issues of fuel emissions and the major carbon footprint head-on. Many people and businesses think that tackling climate change would be too hard or costly. However, Bezos wants to show that if such a large company like Amazon can do it, so can smaller places of business.

He knows that Amazon is in a huge place of influence and wants to use that sphere to inspire other people to work to make the world better.

How will the plan be executed?

The electric vans bought from Rivian are going to be assembled at a plant in Normal Illinois. It was previously owned by Mitsubishi and is a 2.6 million square foot manufacturing plant.

Why does this matter?

Whether you care about the environment or not, Amazon committing to renewable energy is a huge step. Amazon delivers about 2.5 billion packages per year and is on its way to being the biggest package deliverer in the US.

While the ease and convenience make our lives easier, it comes at a cost. With that many vehicles on the road and so many packages needing to be delivered, the trucks are bound to emit more fossil fuels.

Bezos acknowledges this and wants to make a change. Electric cars won’t change how your packages are delivered or their schedule. So as a consumer, the change doesn’t affect you directly.

However, it will hopefully change the climate and the environment around you. Amazon’s switch may also create an easier way for other companies to make the switch to being more eco-friendly as well.

How were the vehicles designed?

Current delivery drivers helped make the amazing designs. The new cars will feature much more comfort for the drivers so that they can perform their jobs easier.

The team spent over 18 months going over all the electric vehicle options available. In the end, they decided making their own would be the best option.

Most of the designs were done digitally, but some were done with clay models. These models were also done at the Rivian headquarters in Plymouth, Michigan.

Bezos said the main reason for using clay models was because it was an inexpensive way to show the team what the cars would look like before any production began.

Will all the vehicles be the same?

All the cars were modeled using clay and Styrofoam with basically the same design. However, the vans will be made in three different sizes with multiple battery sizes.

The purpose for this is because Amazon wanted to optimize each vehicle for the specific route it will drive. So, long and heavily trafficked routes will have a larger van with a bigger battery.

The vans have more safety features than any other van ever made though which will keep their employees and consumers safer.

All the vans will have:

All of the mapping and delivery instructions will also be formed by Amazon itself, rather than using a third-party navigation system. This is all to make the delivery process easier for the driver and the consumer.

Alexa will also be built into all the vans so drivers can use voice commands for driving. Alexa can also tell the drivers the traffic and weather information.

Are the vans already be used?

Many delivery drivers got to participate in a virtual reality setup where they could experience what the new van will look and feel like. However, most drivers are still using their regular vans.

Later in 2021, more drivers will be given electric vans. Most of them will be used in bigger cities first. Cities like Los Angeles already have most of their drivers using them.

All the vans were used and tested for four months before officially being put on the road for drivers and thousands of charging stations are being built in the US and Europe.

Many people are starting to notice the change and have begun posting pictures and asking the delivery driver if they can see inside or take a peek at the features.

Amazon is becoming the world’s leader in deliveries and making every product available to consumers worldwide. Now, they are changing the game by adding climate change and renewable energy to their bucket list.

Since the start, Amazon has focused on being innovative and Bezos shows through this move that he doesn’t plan to stop. With one of the largest companies in the world taking care of the planet, there will be real change.

By owning an Amazon prime account, you inherently take part in this change and can encourage it by continuing to use their services.

Hopefully, you will get to see the electric vans in your neighborhood soon and get to check them out yourself. 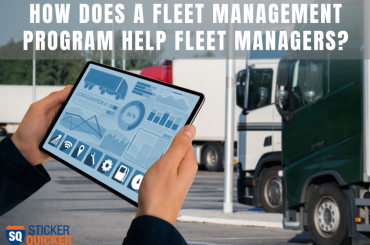 Need to go to the DMV? Try the Safer Alternative with Sticker Quicker 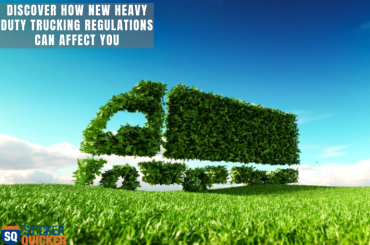 Discover How New Heavy Duty Trucking Regulations Can Affect You